We’ve all been guilty of it at some point — fiddling with the radio while we change lanes, taking our eyes off the road to gaze at the passing scenery. Even professional drivers aren’t perfect. Distractions happen, and sometimes they can be deadly. Recently, the U.S. Congress funded the Strategic Highway Research Program Naturalistic Driving Study (SHRP 2 NDS) to find out just how dangerous distracted driving is.

The study was conducted by scientists from the Virginia Tech Transportation Institute. Rather than using a controlled testing environment, data was collected from 3,500 volunteer drivers over a three year period travelling in real-world conditions. The volunteers’ vehicles were outfitted with a series of radar units, cameras and sensors that allowed the researchers to record and analyze their driving behavior. By the end of the study, the participants had been involved in more than 1600 incidents. 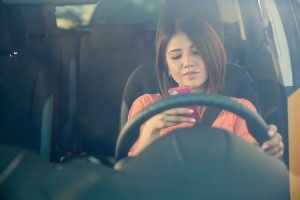 The researchers assessed accident causation based on a number of factors including speed, fatigue, sobriety and distraction. After analyzing the data, the research team concluded that distracted driving was nearly as dangerous as drunk driving.

But Which Distractions Were the Most Dangerous?

Some distractions that the researchers expected to be particularly dangerous were actually fairly uncommon. These included things like applying makeup while driving, and interacting with children in the back seat. In fact, the researchers found that people tended to drive more carefully with children in the car. Other well-known distractions – texting while driving, for example – were found to be very dangerous. Generally, distractions that required additional hand-eye coordination tended to be the most dangerous.

Mood Can Also Have a Profound Effect on Our Attention.

If you’re having a rough day, it might be best to pull over and catch your breath on your drive home. The research team found that drivers who were crying, sad, agitated or angry were 980 percent more likely to be involved in an accident. Strong emotions can hold our attention and make it difficult to focus on external things like the semi that’s about to drift into the left lane.

Regardless of the Type, All Distractions Are Dangerous.

“Next to impairment, distraction is the greatest detriment to driver safety,” said study co-author Mindy Buchanan-King in an interview with Mental Floss. “Based on six seconds of pre-crash video examined by trained data analysts, more than 68 percent of the 905 injurious and property-damage crashes analyzed in our study involved some type of observable distraction.”

Perhaps even more troubling is the frequency with which the researchers observed distracted driving behaviors. The study found that drivers were, on average, distracted more than 50 percent of the time. During periods of distraction, drivers were twice as likely to be involved in an accident.

“These findings are important because we see a younger population of drivers, particularly teens, who are more prone to engaging in distracting activities while driving,” said Tom Dingus, lead author of the study. “Our analysis shows that, if we take no steps in the near future to limit the number of distracting activities in a vehicle, those who represent the next generation of drivers will only continue to be at greater risk of a crash.”

Having a touchscreen media center in your dashboard might be pretty handy, but it can also constitute a very real distraction. As vehicles become more complex and feature-rich, it’s more important than ever for drivers to remain mindful of potential distractions. In the future, autonomous vehicle technologies may eliminate the need for drivers to focus on their daily commute. For now, however, it’s up to us to keep ourselves and our fellow drivers safe on the road.

If you become injured in an accident with a distracted driver, contact a Phoenix car accident lawyer at our firm today.

"I was very nervous after being in my very first car accident. I wasn’t sure what to expect I didn’t even know that I was entitled to a settlement. They helped me with great care and detailed and I was very happy with the results. Thank you so much Hirsch & Lyon"
Posted by: Vanessa Mariscal