Recognizing the Signs of a Traumatic Brain Injury

According to the Centers for Disease Control (CDC), an estimated 1.7 million people sustain traumatic brain injuries (TBIs) in the United States every year. Over 50,000 of these people die as a result of their injuries. Roughly 80 percent of people who sustain TBIs seek treatment in emergency rooms. The remaining 20 percent might never even realize they’ve been seriously injured. 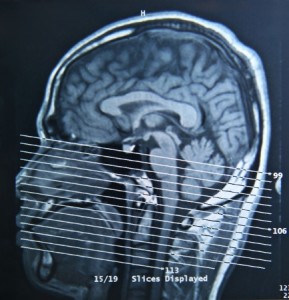 The symptoms of TBIs are varied and not always immediately apparent to the injured party. In some cases they can take days or weeks to appear. That’s why it’s essential for people to seek treatment any time they’ve sustained a head injury, even if it doesn’t seem very serious at the time. It’s also important for people to educate themselves about the signs and symptoms of TBI so that they can recognize them in the event that they or a loved one has a head injury. According to the CDC, TBI symptoms typically fall into one of four categories.

After sustaining a TBI, you may have difficulty concentrating or thinking clearly. You may also have trouble retaining new information. Many people report a general feeling of mental “sluggishness” when trying to think and reason after sustaining a TBI.

Nausea and vomiting soon after a head injury are tell-tale signs of a TBI. Later on, headaches, blurred vision and increased sensitivity to light can manifest as symptoms as well. Dizziness, balance issues and lack of energy are also fairly common physical TBI symptoms.

These symptoms can be especially disruptive and hard to identify. After a TBI, you may feel unusually irritable, upset and prone to mood swings. Some people also report increased anxiety and nervousness. Be careful not to write these emotional symptoms off as ordinary moodiness; they could be signs of a serious brain injury.

You should pay close attention to any changes in your regular sleep cycle following a head injury as well. In some cases, TBI victims will suffer from insomnia. In others, they’ll sleep for hours at a time and still feel exhausted when they wake up.

Finally, you should seek medical attention any time you lose consciousness as a result of a head injury. Even if it’s only for a few seconds, loss of consciousness is indicative of a TBI. When it comes to brain injuries, it’s always best to err on the side of caution.