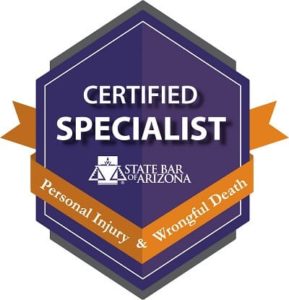 Jack Hirsch is an experienced attorney who has been providing legal representation to clients who have been injured due to the negligence of others since 1990. He founded Law Offices of Jack Hirsch in 1998 in Phoenix, Arizona. On January 1, 2017, Jack Hirsch co-founded the new law firm of Hirsch & Lyon Accident Law P.L.L.C. Mr. Hirsch partnered with Attorney Greg Lyon to form this new law firm limiting their practice to personal injury and wrongful death.

Mr. Hirsch is a native of Arizona and was born in Tucson, Arizona. He earned his Bachelor of Science degree in Finance at the University of Arizona in 1985. He then went to the University of Arizona College of Law, where he earned his Juris Doctorate degree in 1988. Mr. Hirsch is currently admitted in all Arizona courts, including the Supreme Court of Arizona and the Federal District Court of Arizona. He is a member of the State Bar of Arizona, Arizona Association for Justice, and selected as a member of Arizona’s Finest Lawyers, SuperLawyers, and the American Board of Trial Advocates.

Mr. Hirsch has recovered millions of dollars for those injured and their families. He has a vast amount of experience as a trial lawyer. He has been litigating cases for almost 30 years. He has successfully arbitrated and/or taken to verdict approximately 3,000 cases.

Mr. Hirsch treats his clients as his family. He has earned a reputation as being compassionate, knowledgeable, and well-prepared in obtaining successful results for his clients.

"Excellent attorneys that put their clients first. Jack Hirsch was very professional and caring so much that he attended my Dr's appt with me to assist with advocating. My case went on for 3 years and Mr. Hirsch stayed on top of it with remarkable outcomes. I would highly recommend their services to everyone."
Posted by: Michael Mecsey